ETC is proud to announce the latest addition to our arsenal of services: co-packer work in progress purchase order financing for the food and beverage industries!

Contact us today to learn about this dynamic new financing tool, which will supplement your production costs and allow your business to reach new heights! 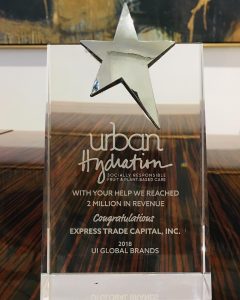 We are proud to announce that our valued client, UI Global Brands, has reached $2 million in revenue!

We take immense pride in helping brands like UI Global to bolster their operational funds and give them room to grow. Our diverse assortment of financial, logistical, and supply chain management services offer our clients transactional security, faster payments, production management, and even collections on their invoices.

Financing in the newspace and aerospace industries can be decidedly complex for a variety of reasons. The industries’ top customers are massive corporations with exceptional negotiation power vis a vis their vendors. These imbalances coupled with a perpetual flow of new innovations create too much uncertainty and risk for traditionally conservative lenders such as banks. Smaller and newer players must therefore look outside the standard lending models and seek out new solutions flexible enough to keep up with their own innovations.

Join us at WeWork Queens Plaza on Tuesday, November 20, at 7pm to learn how you can use trade finance to supplement your operational funds and close the cash flow gap that often occurs when big customers pay on open terms. ETC’s own Joseph Stern will discuss a joint venture between US satellite manufacturers and a Russian space agency that sought to launch commercial satellites into space. This example demonstrates how even the most complex international transactions can be simplified with a strategic system of trade finance and logistical solutions.

We hope you’ll join us for a fun and informative evening! Click here to RSVP.

A back-to-back letter of credit (LC) is a common, but often overlooked, form of trade financing.

In a typical back-to-back LC scenario, an intermediary trading company receives an inbound LC from the buyer’s (applicant’s) bank and, using that first LC as collateral, issues a second, outbound LC in favor of the supplier (beneficiary).

Back-to-back LCs are surprisingly simple to coordinate, as both LCs are nearly identical. The only differences between the two LCs in a back-to-back LC model are the credit amount vs. the unit price and the expiry date/period for presentation/latest shipment dates. The unit price is how much the product will cost the final customer, whereas the credit amount accounts for the wholesale costs. The timing of the two LCs must be staggered to allow time for each party to process and transport the shipment.

The additional layer of security that back-to-back LCs provide comes not only from the presence of two separate, albeit nearly identical LCs, but also from the fact that both LCs are available at the intermediary’s bank. This centralized method of monitoring reduces risk and secures all parties involved in the multi-tiered transaction at hand.

Back-to-back LCs therefore help build trust between buyers and sellers of goods around the world, reduce credit risk, and speed up cash flow. They’re beneficial to the intermediary trading company insofar as the company does not need to disclose to its supplier the details of the ultimate buyer of the goods or even the price at which they were sold.

Click to learn more about our letters of credit.

Big brands, particularly food brands, have been merging with and acquiring smaller brands for decades. In recent years, food and drink executives have continued to strategically acquire small brands, but struggle to boost productivity among those acquisitions without damaging or cancelling out any of the fundamental qualities that made the small brands worth buying.

This struggle to maintain the appeal of a small brand while operating under a massive international conglomerate like Coca Cola or Hershey has become increasingly challenging as consumer priorities evolve. When a big brand acquires a smaller one, consumers tend to be concerned, at least initially, about the product remaining consistent. Over time, however, other issues often arise. A strong company culture and drive to innovate, both of which are often crucial to a small brand’s success, can get lost when a big brand takes over.

A prime example is the trajectory of natural food brand Kashi since it was acquired by Kellogg Co. in 2000. Prior to the acquisition, Kashi was one of the first brands to usher in the now-lucrative and popular industry of healthy foods made from simple, ethically sourced ingredients. Though the partnership worked for a while, Kellogg’s impulse to control Kashi’s internal operations eventually took hold, which hindered Kashi’s ability to constantly innovate and improve its products. Before the acquisition, teams of three or four people made decisions about everything from suppliers to pricing to new product development. In an attempt to take more decisive control, Kellogg’s convoluted Kashi’s processes, slowing down their decision-making capability and complicating attempts to change or grow.

To be clear, no one is saying that big brands shouldn’t acquire smaller ones. There is immense potential value in giving young, fresh businesses the resources that big brands have. However, when acquiring a young company that’s found a niche and an audience, one should be aware of what makes the small brand appealing to consumers and make every effort to maintain and support those qualities, while still facilitating increased production and global reach.

Some of Walmart’s recent acquisitions, notably Bonobos, are perfect examples of this. When Walmart initially acquired Bonobos, there was considerable public backlash. Fans of the online men’s wear brand were concerned that quality would plummet in favor of lower prices when Walmart took over. Walmart wisely remained “hands-off”, allowing Bonobos to uphold its central values as a company: high quality, a good fit, and inclusive sizing. As a result, Walmart indicates that its online sales have increased substantially since it acquired Bonobos among other ecommerce brands last year.

Needless to say, it’s a tough balance to strike, but since changing a formula that works for a small brand is a bad idea, it’s obviously important for big brands to rigorously research whatever businesses they plan to acquire. It’s also important to keep key team members from the smaller business involved and give them input on how the business moves forward after the acquisition, rather than commandeer operations entirely. Simply creating an open line of communication can do wonders to not only maintain the acquired brand’s growth and success, but also to establish a positive working relationship between new management and the people who made the business successful in the first place.

Please be aware that Express Trade Capital will be closed on Monday, October 8th in observance of Columbus Day. Please plan your transactions accordingly and have a safe and pleasant holiday.